Anytime of year can be special for visiting wineries in Catalunya, but winter can be especially remarkable in the Emporda region for one unique weather feature, the intense and extreme winds known locally as tramuntana.

The winds come sweeping out of the Pyrenees, and across the region towards the Mediterranean and south sometimes as far as northern Maresme, where they are merely a strong breeze. One winemaker friend of mine says that when there is a wind in Girona, then you can expect the gale force winds of the tramuntana to be in full effect. 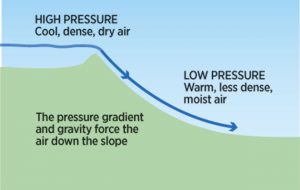 So, what is tramuntana? It’s similar to the mistral winds of southern France, and derive the same intensity from a similar method of delivery. Ha! That means that both the tramuntana and the mistral winds come sweeping down the Pyrenees and either head across France or down and across Catalonia. Some locals say they are “separate” from the  French mistrals, citing Catalan uniqueness to the phenomena, while others say it’s the same wind. I try to stay out of that debate for many reasons.

Basically, the tramuntana wind is a katabatic wind, which is a high pressure/high density air down through the Pyrenees, carried by gravity and building up speed and intensity as it comes down the mountains. They are also called drainage winds.

These winds are considered essential for winemaking, as the periodic development of these winds assists in ensuring that mold, mildew and other nasty developments associated with dormant winter months are kept in check to maintain vine health.  In fact, many vineyards in Emporda region have oriented their vines to maximise the “clean out effect” with the rows facing the Pyrenees and the Mediterranean to have the wind breeze down the rows of vines rather than “across” the vines, like a wind break.

It is said that the winds can drive you mad, as some locals have said, as has the famous French author Victor Hugo when he wrote in his poem “Gastibelza”.  The main character says, “Le vent qui vient à travers la montagne me rendra fou…” (“The wind coming over the mountain will drive me mad…”) The question becomes is it better to live further or closer to the source? You’ll have to visit and decide for yourself.

So where can you go to really feel the full power of the Tramuntana winds at the vineyards? Two of our favourite spots are in Alt Emporda, closer to the Pyrenees, garnering the full effect. Both are 30 minutes from where the video above was taken. Terra Remota is in Sant Climent Sescebes and Cellers d’en Guilla is just down the road near Rabos  in the village of Delfia. Both have panoramic roof tops to view the full effect of the Tramuntana winds, and after you can head inside and enjoy a tasting and a lunch.

In closing, even in winter, Catalan wineries can be an interesting place to visit to observe natural phenomena which in its way, assists the local Emporda winemakers to bring some unique and interesting wines to market. It is definitely worth a winter visit to enjoy the Catalan phenomena, The Tramuntana winds.